What Is Antenna Gain

With any antenna, the apparent increase in signal is not an amplification of signal, but it is the act of redistribution of available Radio Frequency (RF) signal into a preferred direction. So basically, antennas only divert, direct, or concentrate radio energy in some direction, they don’t create it.

The increase in signal using an antenna is called gain and is measured in dBi. The base for dBi measurement is an isotropic radiator (idealistic model that has the same value when measured in different directions) at radio frequencies. As new RF signal is not generated, the stronger signal is achieved at the expense of most other directions.

Some people think that a higher gain antenna will give them the strongest signal and highest quality connection. This is true in some cases, but in certain applications too much gain can be a bad thing. The truth is, the answer to whether you need a higher or a lower gain antenna lies in your application.

The fact that we can't immediately see the RF waves sometimes confuses people, but don't worry, once you know what gain really is, you can determine if more (or less) is better for any particular application.

An antenna that radiates energy equally in all directions and has no preference for radiation in any direction is said to have "no gain". You would say this no-gain situation is 0 dBi.

Omni-directionality is said to have no directivity (preference for any direction), as opposed to having the signal concentration in a particular direction, and the amount of signal in a preferred direction is quantified as gain. The +(number)dBi is said to have double the (number) gain and the -(number)dBi is creating loss, not gain following the same pattern.

Which Antenna and Gain Do I Need?

If you want to focus all of the signal to direct it to a distant target, then the high gain antenna is definitely the best choice. High gain antennas need to be pointed in a preferred direction to send RF signal so that limited signal can be intensified in desired location, as illustrated below. 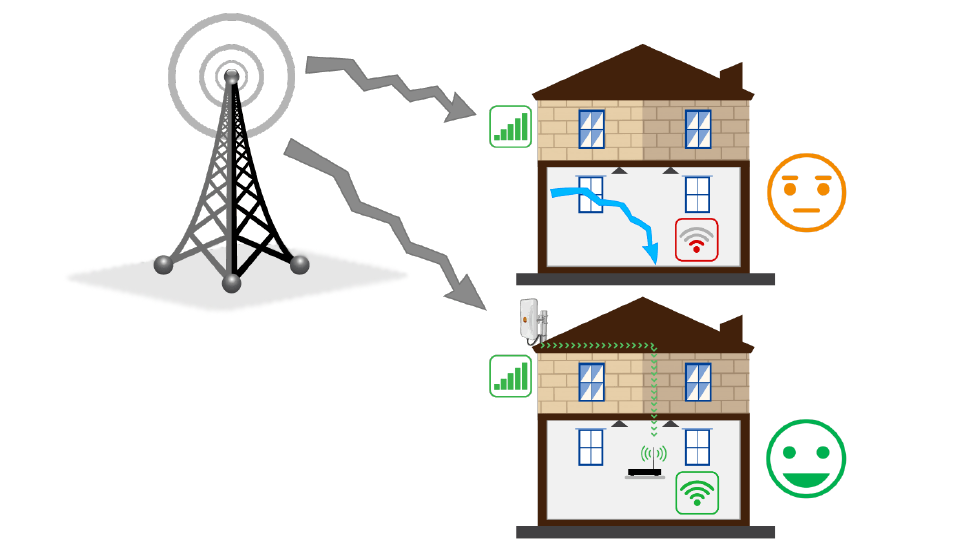 In addition, the positioning of an antenna is key:

However, if you want to broadcast evenly to a whole room (or give omni-directional access to your wireless signal), you do not want much gain (or it’s directivity). Remember, "gain" is simply stealing radiated energy from some directions to intensify others. The higher the dBi number of the antenna, the higher the gain, but less of a broad field pattern, meaning that the signal strength will go further but in a narrower direction, as illustrated in the diagram below. 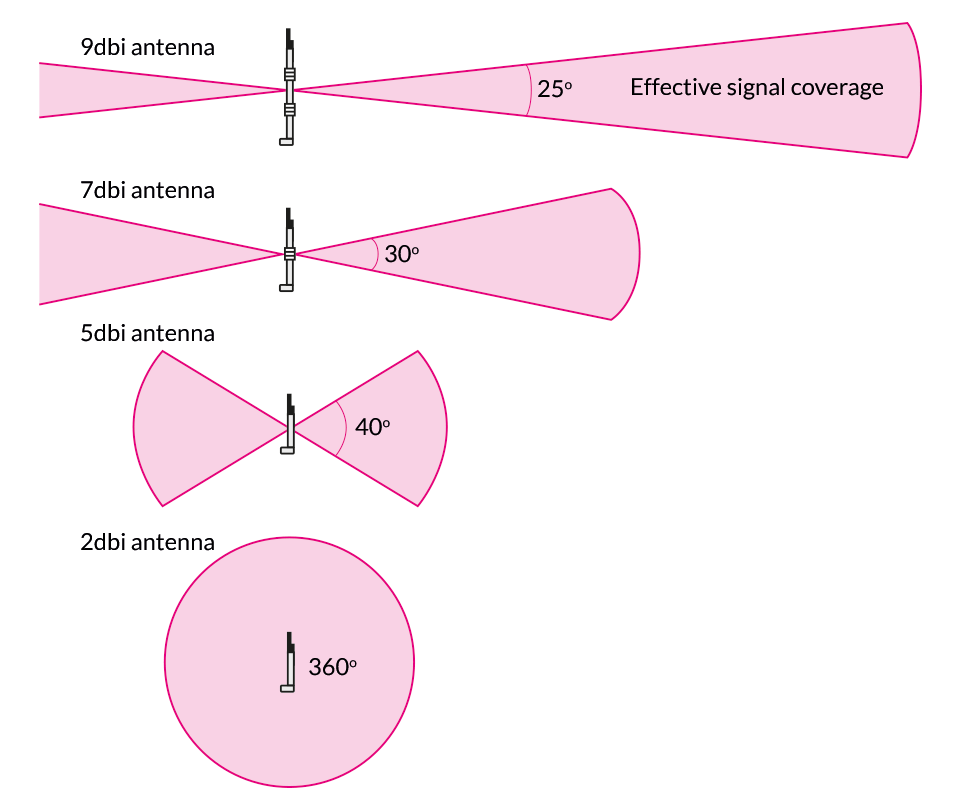 As you can see, higher gain is not automatically better - it depends on the application. If you don't intend to point your antenna in a particular direction, then you don't need much gain.

For example, say you want to set up a wireless network in an outdoor beer garden of a pub. For this application you would want an Omni-directional antenna to provide 360° signal coverage for every customer.

Using a 15 dBi Omni-directional antenna, the high gain will project the WiFi signal way above the required 400 ft coverage, and will give better signal for people far outside the garden. Users within the 400 ft will actually see lower speeds and poorer signal quality. For this application, a lower gain antenna such as a 6 or 8 dBi would provide better signal quality and coverage for the pub’s customers. Additionally, a high gain antenna will not reach users sat down as the wireless signal is projected better horizontally rather than vertically. The lower dBi antenna will provide more of a round shaped signal pattern, which will then project the WiFi signal lower to the ground with better vertical reach, as illustrated in the diagram below. 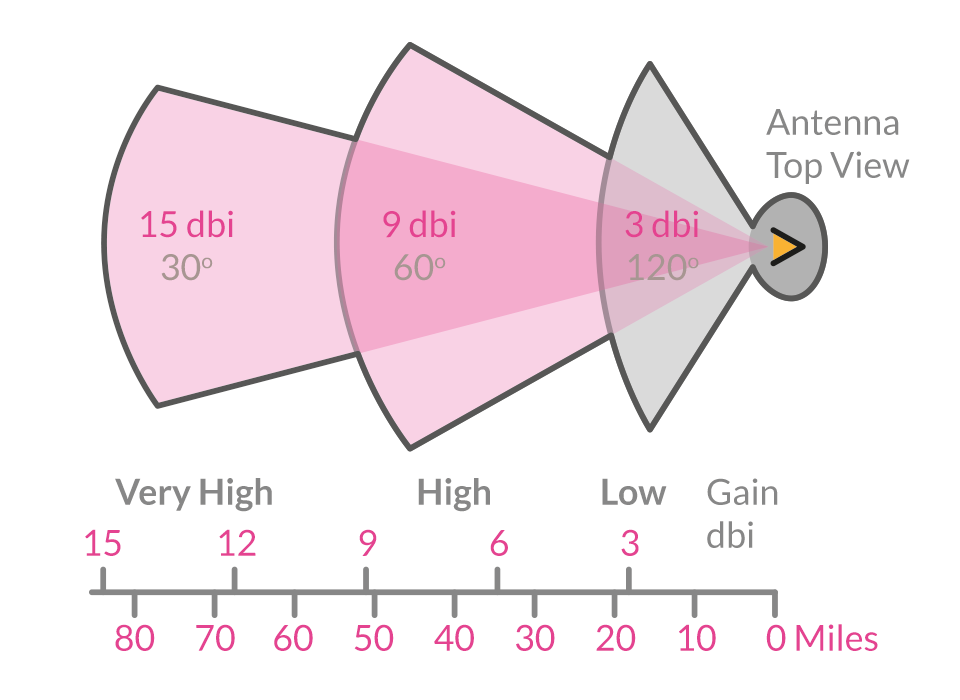 Antenna Gain - Things To Look Out For

You may want to take some manufacturers' published gain figures with a pinch of salt, as figures can often published with the highest possible gain, in an ideal environment for the antenna. Even omnidirectional antennas can potentially have their 'blind spots' or 'nulls' in radiation patterns. Understanding the radiation pattern of an antenna can be a great way to identify important parameters, like the beam width of an antenna.

Moreover, you can be looking at two different antennas that have the same gain according to the spec sheets, but one of them can have the potential to perform better than the other. An understanding of where and how the antenna will be deployed is key to help determine which environmental parameters are important and in turn which antenna would suit you best.

Some antenna manufacturers, such as Laird and Taoglas, publish their Radiation patterns. This insight will give you the confidence to choose which antenna is best for your application. We would recommend that you look at the gain across the required frequency band(s) and not just the published maximum gain, because antenna radiation patterns and gain change as the frequency changes.

Another thing that you have to be aware of is that walls or objects can weaken the signal. In addition, certain radios work better transmitting more power and using smaller antenna while others like to transmit less power but use larger antenna. Having a bigger antenna does not always increase usability of the signal. It may increase the total signal strength but it also can increase the noise in the signal.

As you can see gain is an important parameter in any antenna. Manufacturers such as Laird dedicate their whole career to designing antenna systems because it is such a complex subject. Here are some of their tips on what to look for when choosing an antenna: 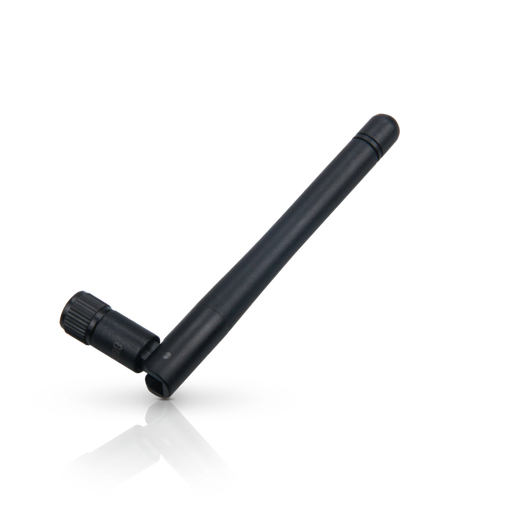 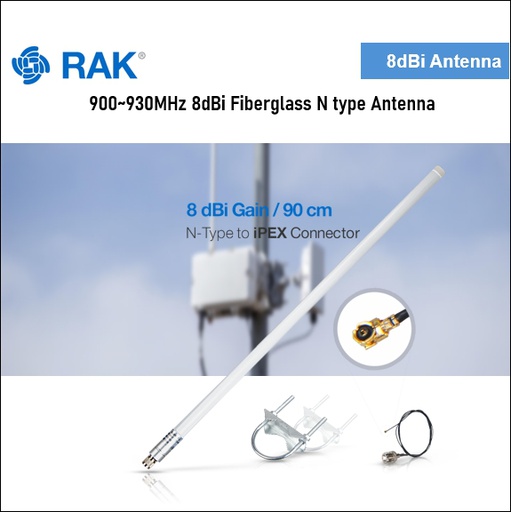