Industrial Ethernet—real-time Ethernet—has experienced a huge upswing over the last few years. Although classic fieldbuses are still running in large numbers, they have passed their prime. The popular real-time Ethernet protocols extended the Ethernet standard to meet the requirements for real-time capabilities. According to HMS, industrial Ethernet is growing faster than previous years, with a growth rate of 22%. EtherNet/IP and PROFINET are tied at first place, with PROFINET dominating in Central Europe, and EtherNet/IP leading in North America. Runners-up globally are EtherCAT, Modbus-TCP and Ethernet POWERLINK. TSN now provides a new route to real-time Ethernet.

Fieldbus is still growing, but the growth is slowing

Fieldbuses are still the most widely used type of networks with 48% of the market. They are still growing as many users ask for the traditional simplicity and backwards compatibility offered by fieldbuses. But the growth rate is slowing and is currently at around 4% compared to 7% last year. The dominant fieldbus is PROFIBUS with 14% of the total world market, followed by Modbus-RTU and CC-Link, both at 6%.

Wireless is redefining the networking picture

Wireless technologies are growing quickly at 32% and now account for 6% of the total market. Within Wireless, WLAN is the most popular technology, followed by Bluetooth. Wireless is increasingly being used by machine builders to realize innovative industrial automation architectures and new solutions for connectivity and machine control, including Bring Your Own Device (BYOD) solutions via tablets or smartphones.

In Europe and the Middle East, PROFIBUS is still the leading network while PROFINET has the fastest growth rate. Runners up are EtherCAT, Modbus-TCP and Ethernet POWERLINK.

The US market is dominated by the CIP networks where EtherNet/IP has overtaken DeviceNet in terms of market shares. (CIP= Common Industrial Protocol suite by ODVA).

In Asia, a fragmented network market is very visible. No network stands out as truly market-leading, but PROFIBUS, PROFINET, EtherNet/IP, Modbus and CC-Link are widely used. EtherCAT continues to establish itself as a significant network, and CC-Link IE Field is also gaining traction.

In the context of factory automation and drive technology, real time means safely and reliably reaching cycle times in the range of less than ten milliseconds down to microseconds. For these real-time requirements to be satisfied, Ethernet also had to gain real-time capabilities.

Ethernet Is a Lot Faster Than a Fieldbus—So What?

For the real-time requirements of automation to be satisfied, both transmission bandwidth and transmission latency need to be guaranteed. Even if these bandwidths are usually decidedly small (a few dozen bytes per device), this transmission channel must be available in every I/O cycle with the required latency.

However, the guarantee of latency and bandwidth is not provided with classic Ethernet. On the contrary, an Ethernet network may discard frames at any time if this is necessary for operation. What does this mean?

Ethernet is a so-called bridged network. The frames (Ethernet frames) are sent from one point to another: From the endpoint to the switch (bridge), from there possibly to other bridges, and finally to the other endpoint. This architecture is largely self-configuring. The bridges first completely receive frames before forwarding them. And this is where multiple problems arise:

We can argue that Ethernet normally works well and is somehow fair. However, by doing so, we use two words that make no sense in connection with hard real time. It is not enough if a real-time condition is only normallymet. It always has to be met.

Anyone who lives next to a chemical plant or a refinery can appreciate this. And industrial communications aren’t fair either: The most important thing, the control/closed-loop control application, always has priority. 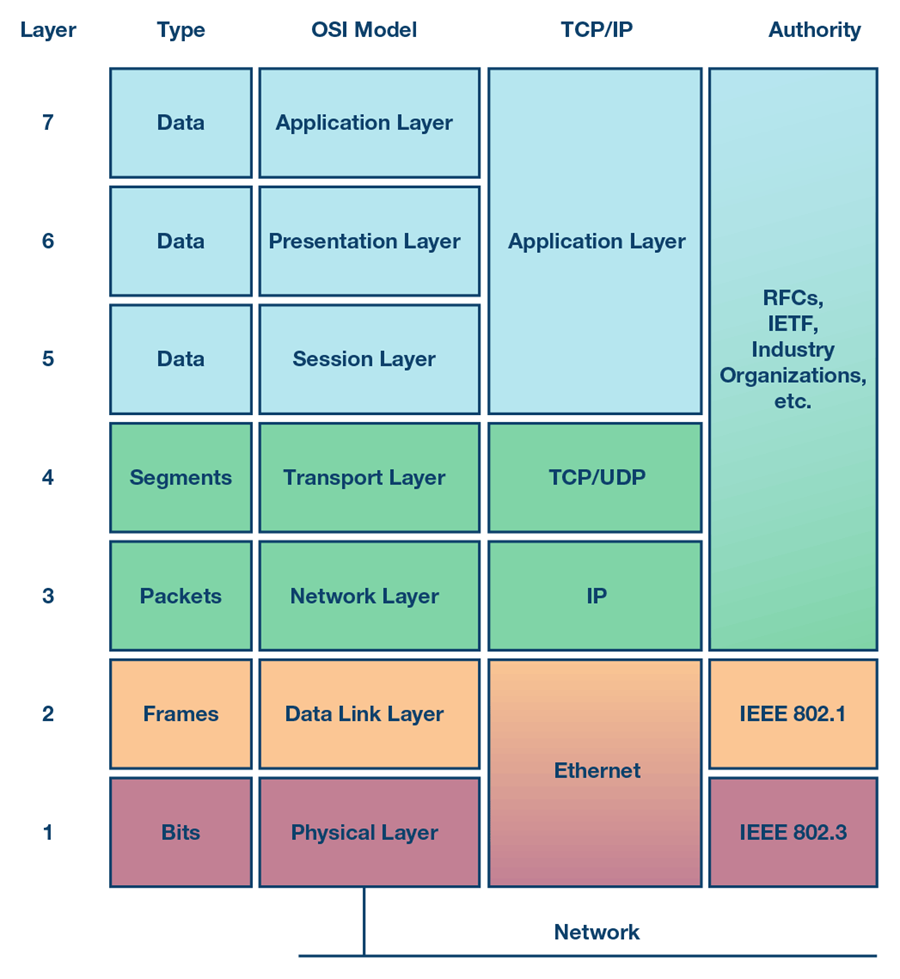 Because no solution to the problem was available in the IEEE, which is responsible for Ethernet standardization, the industry developed its own solutions—once again demonstrating its innovativeness. The solutions all have their strengths and weaknesses and ultimately address different markets. 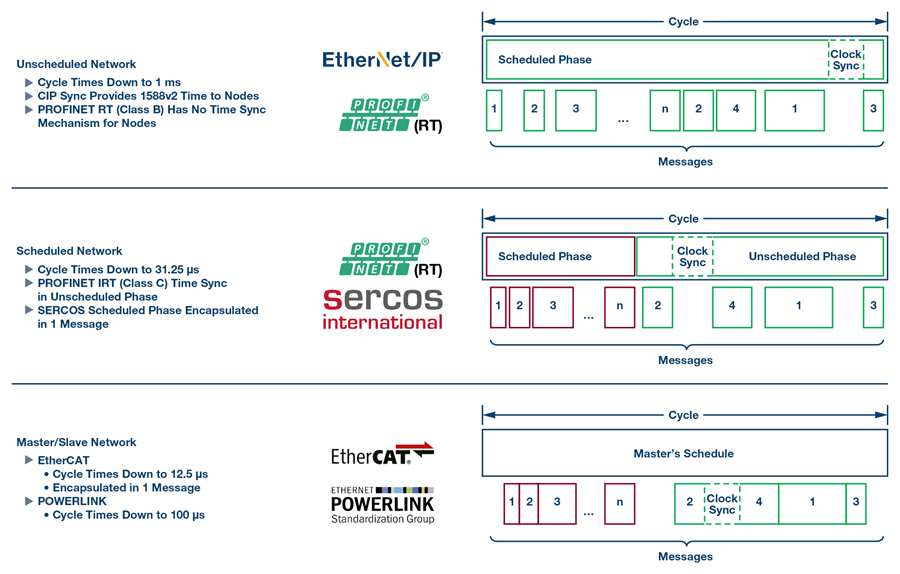 For hard real time, PROFINET offers the isochronous real-time (IRT) extension. Here, part of the Ethernet bandwidth is reserved exclusively for IRT traffic through an extension to standard Ethernet hardware. This is made possible by precise synchronization of the clocks in the IRT nodes. As a result, a channel (the red phase), can be blocked for normal traffic in every cycle. Only IRT frames in the red phase reach the network. In addition, the network participants send the IRT frames exactly at precalculated times, enabling maximization of efficiency within the red phase. The IRT frames move almost without slip through the network. One advantage of this is that it limits the length of the red phase, in which all other traffic must wait, to the bare minimum. The red phase can occupy up to 50% of the bandwidth of the Ethernet channel.

As already mentioned, a full length (1552 byte) Ethernet frame needs about 124 µs on the wire. If PROFINET IRT occupies max. 50% of the bandwidth, the fastest cycle time is 2 × 124 µs = 248 µs, or 250 µs when rounded up. Only in this way can other protocols (like HTTP) coexist in unchanged form with it.

Even faster cycle times of down to 31.25 µs are possible due to PROFINET 2.3 for IRT’s optimizations, including fast forwarding, dynamic frame packaging, and fragmentation.

In the development of EtherCAT, there were other requirements in the beginning. EtherCAT is a fieldbus based on the physical Ethernet—that is, layer 1. Even layer 2 is optimized for fieldbus applications and high throughput. EtherCAT doesn’t have the classic Ethernet bridge. It uses a summation frame telegram, which makes data transmission especially efficient. Instead of normal Ethernet, in which a separate frame is sent by each device involved in communication between devices, EtherCAT sends one frame per cycle. However, this frame contains all data for the addressed devices. While the EtherCAT frame is being forwarded by a device, the data for that particular device are inserted into and taken out of the frame live. Through this, very short cycle times of even less than 31.25 µs, in the extreme case, can be achieved.

EtherCAT also has time synchronization. A lot of effort was put into enabling the not always ideal Ethernet interfaces on a PC to be used as masters for EtherCAT.

Ethernet traffic such as web or TCP/IP traffic can only be transported in small portions in piggyback style over EtherCAT; direct coexistence on the wire is not possible.

What About the Others?

POWERLINK takes the same basic approach that EtherCAT does; it assumes complete control over the Ethernet and transports IP applications by piggyback to the nodes. But that’s the only thing they have in common. POWERLINK does not employ a summation frame protocol. Nevertheless, it performs similarly well in practical applications.

Like IRT, SERCOS has a reserved bandwidth, but uses a summation frame protocol within it. SERCOS allows other protocols to coexist.

IEEE approached the topic of real time within the scope of the audio/video bridging (AVB) protocol. In the improvement of the protocol, the more challenging real-time communications of industry were also considered. The original name for the set of standards, AVB2, was hereupon changed to TSN (for time-sensitive networking). With these standards, it is now possible to use a unified, deterministic version of Ethernet.

This actually makes many things easier. For example, the well-known industrial networks are nearly all defined for 100 Mbps. Today, however, gigabit Ethernet and 10 Mbps Ethernet have become the focus of attention in special applications. The TSN standards cover all speeds. With TSN, the wheel does not have to be reinvented: if it weren’t for TSN, all of the existing standards would have to be redefined for gigabit—which would result in costs for hardware development and in market fragmentation.

How Does TSN Help? Real Time with TSN

TSN extends layer 2 of Ethernet to include a series of mechanisms needed for real-time operation:

The TSN streams can now be set up in consideration of the existing resources in such a way that no frame has to be discarded anymore. The bridges now use their resources for loss-free forwarding of the TSN streams.

And What Happens Above Layer 2?

Behind every internet Ethernet protocol lies an organization that advances the standardization and popularization of the respective protocol. Each of these organizations has formulated a TSN strategy. Consequently, we will see nearly all existing protocols again with TSN—in one form or another. Staying with our examples:

For PROFINET, the path to TSN is a relatively short one because there is already a wealth of experience with time-aware shaping available (it is already done very similarly to IRT) and the coexistence of industry and IT protocols has always been supported. Much remains the same for the user, so a familiar environment can yield new performance.

EtherCAT and, similarly, SERCOS will make TSN accessible above the field level. For example, the EtherCAT automation protocol (EAP) is very suitable for networking classic EtherCAT segments via TSN at a low overhead.

However, there are also new players in the field.

There is a group that is defining a completely new industrial Ethernet protocol. OPC UA is being used as the application layer. TSN is seen as a means for making this protocol real-time capable. However, work still has to be done here. A new transport layer for OPC UA, the so-called OPC UA PUB/SUB protocol, is needed for the transport. 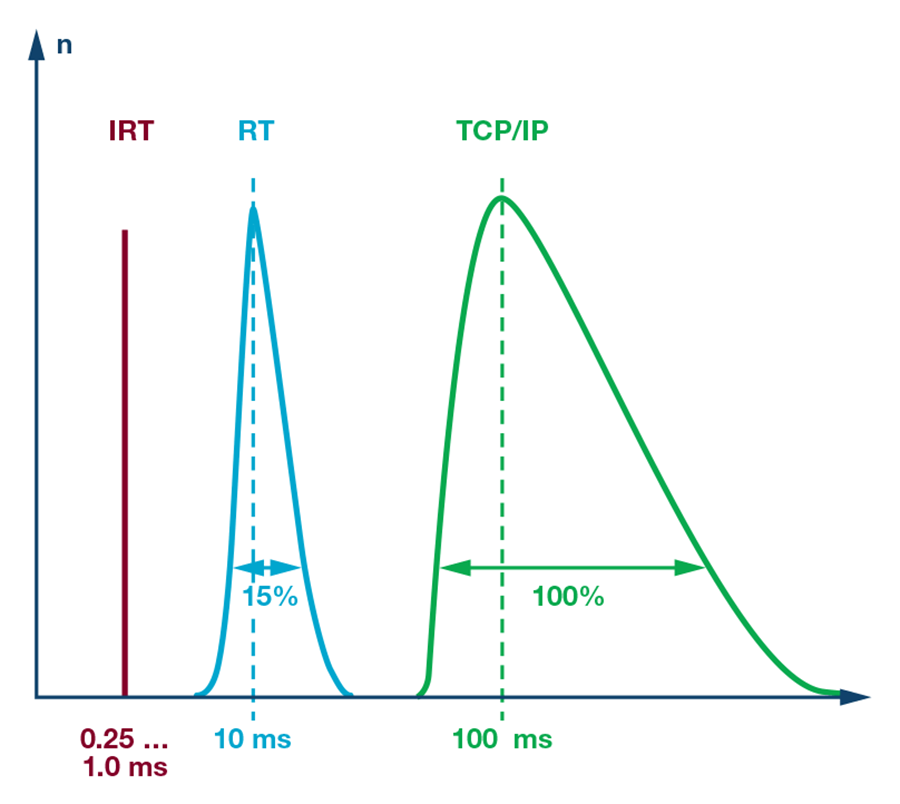 Does a Lot Help a Lot? Not in Real Time

Today we are using 100 Mbps Ethernet in industrial automation and soon gigabit Ethernet will be available. However, higher speed does not automatically mean guaranteed latency and guaranteed transmission. Hence, for hard real time, special mechanisms are always necessary. With TSN, they are now standardized.