Constant ventilation and permanent control of CO₂ levels are two of the keys to avoiding transmission in closed rooms, as fresh air dilutes the infected particles

When we breathe, we exhale CO2, as shown by this infrared camera, Outdoors, the CO2 is rapidly diluted and the risk of transmission is very low because we don't breathe any air that has previously been exhaled by another person.

In closed spaces with no ventilation, such as this car, a meter show that parts-per-million(ppm) of CO2 accumulate to the extend that within 15 minutes we re-inhanle 4% of the air we have already breathed

if the car is shared and there is no ventilation, within the space of 10 minutes, 8% of the air we breathe in will have already been exhaled by the other passenger.  That means we are sharing the air with another person and the risk of transmission is high.

if one of the two people in the car is Covid-positive, the risk of the other  catching the virus is 30% in 30 minutes or 71% in an hour

if both people open their windows just five centimeters, cross-ventilation can renew the air up to nine times every minute. the exhaled air disappears and the robability of transmission is low

Humanity has been fighting an invisible enemy for more than a year. Of course we do not see the coronavirus and, in many cases, we do not even know if we are in contact with an asymptomatic case. But it is not the first time that an invisible threat has been fought using an indirect approach: think of the canaries that were once taken down the coal mines to detect gas leaks.

During this pandemic, it has been shown that poorly ventilated buildings are the most dangerous environments of all because particles containing the virus can linger in the air until someone breathes them in. And although we do not have a device that can show these particles, we can measure the air quality and CO₂ concentration using a meter. The higher the concentration of CO₂, which is exhaled when we breathe, the worse the room’s ventilation. A simple measurement allows us to know if the room is loaded with air exhaled by other people or if it is well ventilated, thereby drastically reducing the risk of infection.

Because of its reduced dimensions, the interior of a car serves as a microcosm of what happens in larger rooms. When a person gets into a car where there is one other person and the windows are closed, the concentration of CO₂ soars, as a percentage of what is breathed in has already been exhaled by the other passenger. However, simply by opening the windows just a few centimeters and generating cross-ventilation, the air gets constantly refreshed. In a house, a bar or a classroom, the premise is basically the samed

Link between CO2 and breathed air 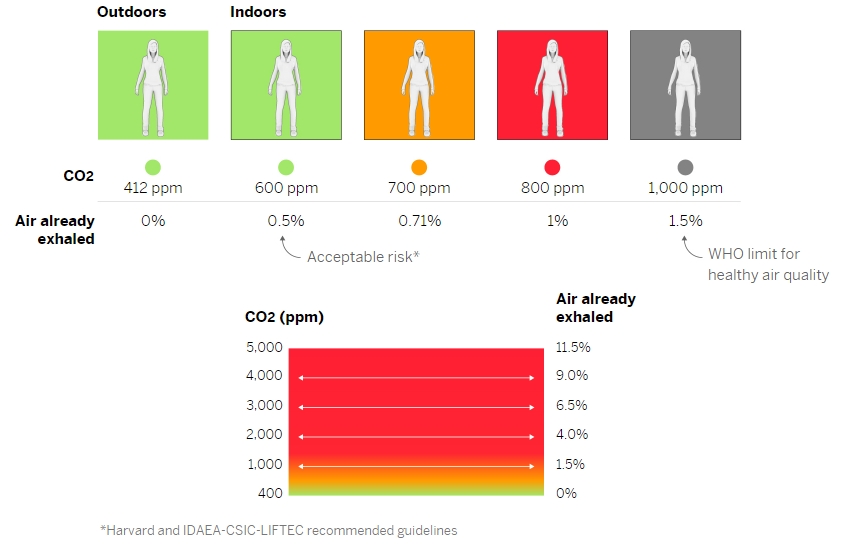 While the virologist Margarita del Val keeps an eye on the levels of CO₂ in cars that she uses with her own meter because “it is an indirect indication that helps us to ventilate correctly,” she is not in favor of promoting its use in the daily lives of normal people. She is, however, in favor of it being regulated and its use promoted as a tool for the authorities. “In many stable environments, such as schools, it is not necessary to have one installed; just a few measurements and you know what is required to maintain good air renewal,” notes Del Val, who is in charge of the Spanish National Research Council (CSIC) platform for Covid-19. “And that includes limiting exposure to the cold, because sometimes it is enough to open the windows just a little.”

Last week, Del Val and 100 other scientists and health professionals sent a letter to the Spanish authorities in which they demanded that urgent measures be taken to prevent transmission caused by poor ventilation. Among the measures advocated was the use of CO₂ concentration as a benchmark by which to measure air quality. Another of the letter’s signatories, Javier Ballester of the University of Zaragoza, is critical of the fact that the government is doing little to tackle existing confusion on the issue. “It’s not enough to provide information via Twitter,” he says. “It’s all very complex – biology and behavior – but there are two indisputably effective factors: ventilation and masks.” Just as the government regulates the quality of masks, it should provide information on how to properly ventilate. There have been many anecdotes describing how some individuals and educational centers ventilate prior to occupancy, leaving the room freezing cold, then close the windows as soon as people arrive, which is when the risk exists. “If they don’t know this, they won’t open the windows, or they won’t sit by the window in the bar: individual awareness is decisive,” says Ballester. 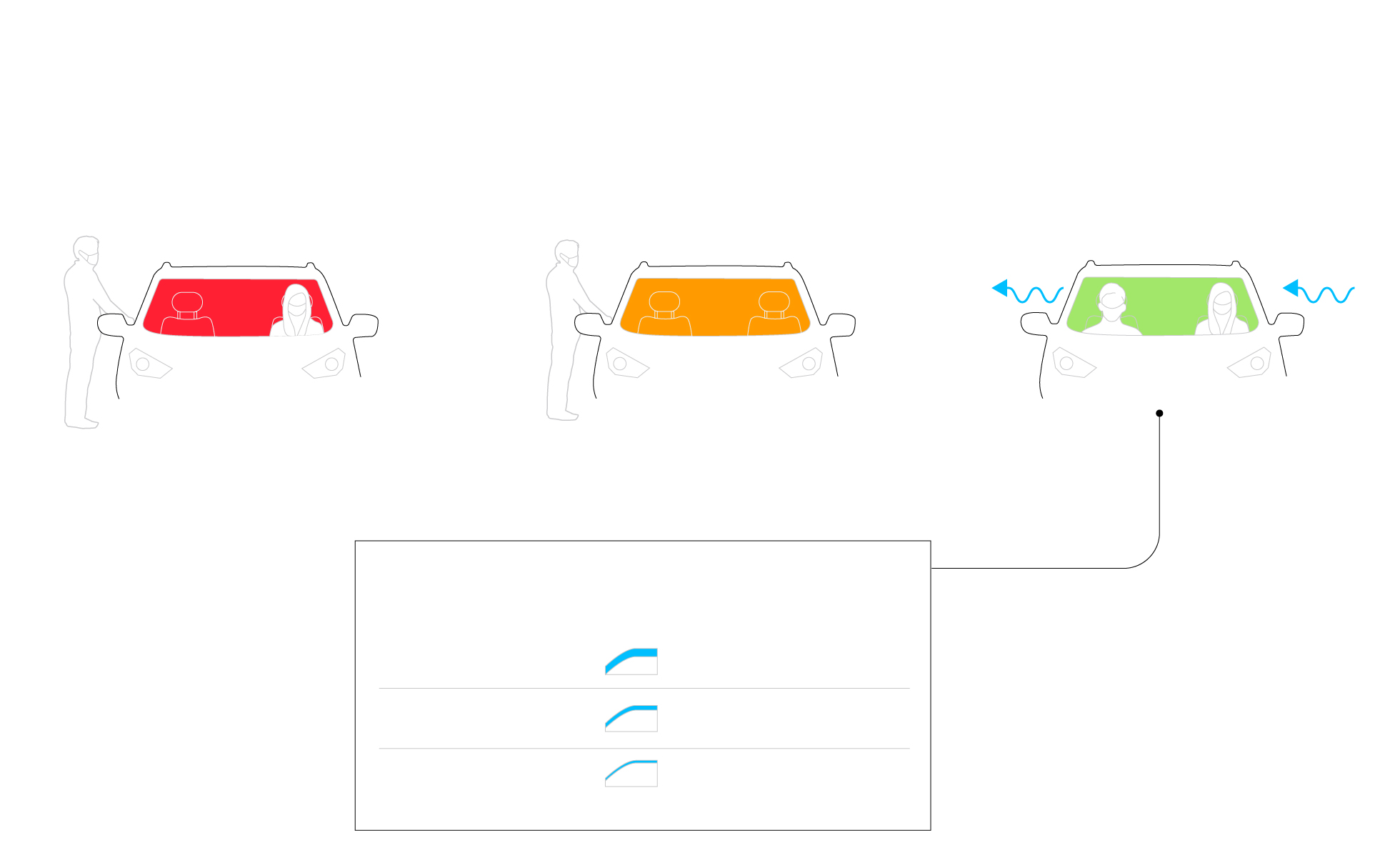 Risks entering closed spaces and how to avoid them

Both CO2 and the coronavirus can linger for hours in an unventilated closed space.

Entering a closed space occupied by others entails a risk if we don’t know if it contains air that has already been exhaled.

If we are going to enter a closed space that does not have a CO2 meter, it is essential to ventilate it first.

Source: Calculations of air renewal obtained by David Higuera, an industrial engineer and expert in installations, using an anemometer.

Scientist Pedro Magalhães de Oliveira, from Cambridge University, has studied how infected aerosols – the suspended viral particles exhaled when talking, singing or breathing – work. To calculate optimum conditions for daily scenarios, Oliveira has developed an online tool called airborne.cam. “The potential for measuring indoor CO₂ levels has been largely overlooked,” he says. “Health authorities could do this to identify high-risk locations and better inform the people who manage them.” He does point out, however, that even in a well-ventilated space, there could be short-range transmission when viral particles are breathed in soon after a positive Covid case exhales if there is not enough time for the aerosols to be diluted. “That’s why it’s so important to wear a mask and keep a safe distance, even outdoors,” he says.

Some authorities have taken note. For example, the regional government of Navarre in northern Spain includes the measurement of CO₂ as a important tool for the hospitality sector. A document advising on measures to be taken during the Easter holidays states: “Ventilate as much as possible and measure air quality, using CO₂ meters… If the concentration of CO₂ exceeds 800 parts per million, increased ventilation is recommended or decreased attendance until it [CO₂] falls below that indicator.” In the event, the region has opted to ban indoor drinking and dining altogether over the Easter period.

Meanwhile, countries such as Germany, Canada and the UK include CO₂ monitoring in their pandemic guidelines. Last summer, the Harvard School of Public Health published a guide for reopening schools that became a reference. The guide points to these monitors as a key tool for calculating the air quality of classrooms. The CSIC also included them in its recommendations. And the World Health Organization has just released its own detailed manual for adequate ventilation against Covid. 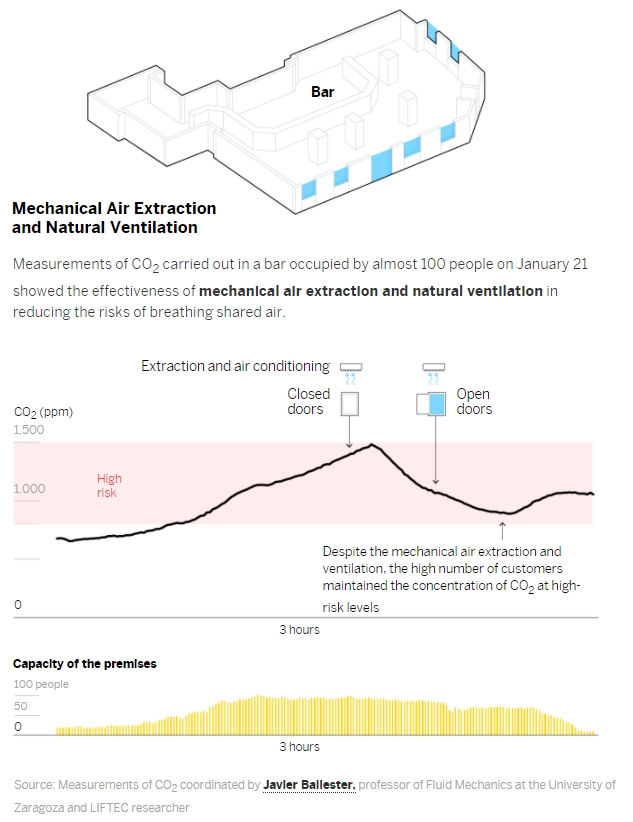 But Del Val highlights a major drawback in CO₂ measurement, namely that it does not distinguish between scenarios in which masks are worn or taken off. “Measuring CO₂ in a bar where you can uncover your mouth and talk and shout should not be the same as in a theater or a museum, where you are quiet all the time and wearing a mask,” she says. Del Val believes that the benchmark CO₂ levels for premises where the mask can be removed should be stricter. “It would be a perfect tool for the hospitality industry, to get them on our side,” she says. “You have to support the bars, but first there needs to be a good understanding of what a lower-risk environment consists of, if using these tools.”

Methodology: The infrared camera images were recorded by the Leeds Environmental Fluid Dynamics Laboratory. In-car measurements were taken with an air quality monitor (Aranet Pro Home) in a vehicle with the windows closed and no ventilation last February 25. The risk of transmission was obtained using the airborne.cam simulator developed by the University of Cambridge and the calculations of air renewal inside the vehicle were obtained with an anemometer (David Higuera, industrial engineer and expert in installations.) 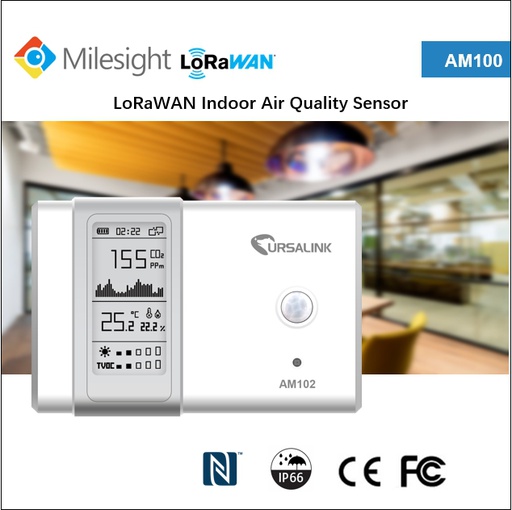 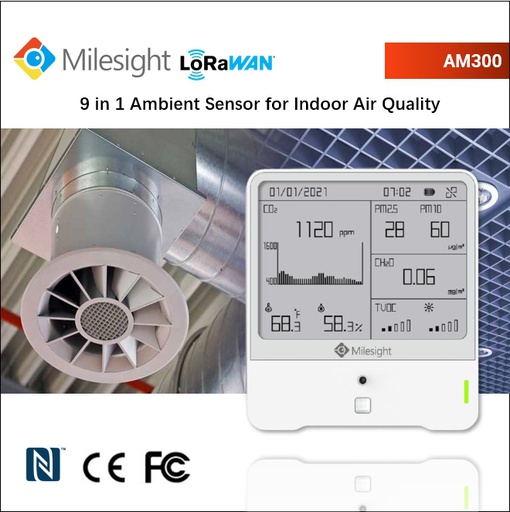 AM300 9 in 1 Ambient Sensor for Indoor Air Quality 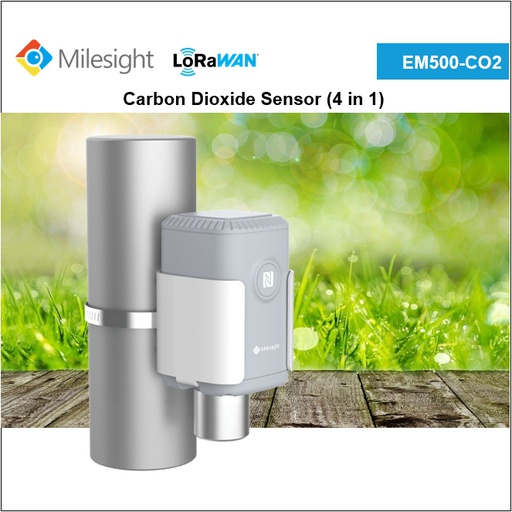 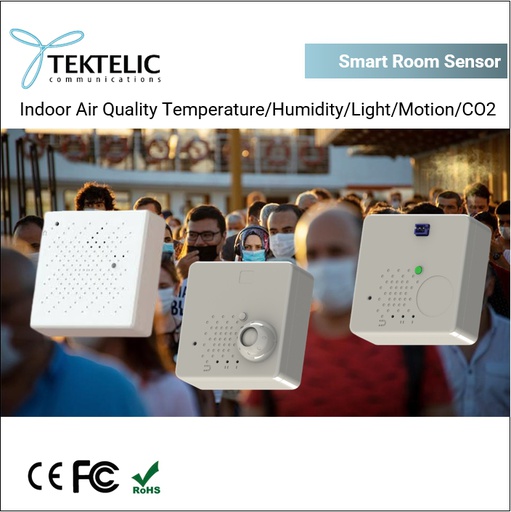 A room, a bar and a classroom: how the coronavirus is spread through the air